Yale is the focal point for much of the intellectual and cultural life of New Haven. Yale offers two symphony orchestras, a symphonic wind ensemble, a jazz ensemble, the Yale Repertory Theater, the Yale Art Gallery, the British Art Center, and more than a thousand informal concerts, recitals, and theatrical productions each year. Many of these events are presented by undergraduate members of Yale College; others are presented by the Schools of Fine Art, Drama, and Music. 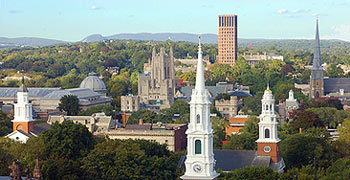 Beyond the campus is a small Yankee town of 136,000. Birthplace of the modern telephone exchange and pizza, New Haven dates back to 1638. In the midst of a busy urban center, several areas of the city still retain the atmosphere of earlier days. Several clubs in the area feature jazz and rock bands. Late-night coffee houses near campus allow you to sit for hours over a cup of the best espresso south of Boston. Nearby is a 24-hour bookstore, a haven for fantasy and alternative literature enthusiasts. There are many movie theaters in the area, several featuring art films and retrospective shows.

Indeed, New Haven has a rich cultural life independent of that provided by the University. There is an excellent resident theater company, the Long Wharf Theatre, which produces plays from the standard repertoire and one or two new works each season. The historic Shubert Theater and the Palace present a wide selection of musical theater and drama. New Haven also has its own professional symphony orchestra, chamber ensembles, and a small ballet company. The town is also host of the widely acclaimed International Festival of Arts and Ideas. Every June, world-class theater, film, and dance productions; art and photography exhibits; panel discussions and poetry readings; and many musical events turn the city into a cultural and intellectual Mecca.

New Haven boasts a wide variety of culinary establishments, from the mundane to the exotic. Available at just about any hour is the “sub” sandwich and pizza, but a variety of other fare is also available at restaurants within walking distance of the central campus: Italian, Chinese, Mexican, Japanese, Thai, Indian, Cuban, and “natural.”

For outdoor and sports enthusiasts, New Haven boasts minor league hockey and baseball teams, the Connecticut Tennis Center (host of the annual New Haven Tennis Tournament at Yale), and over 800 acres of beautiful trails and fields at nearby East and West Rock Parks for jogging and biking enjoyment. Yale’s famous Payne Whitney Gymnasium is open to students at no charge during the academic year and for a nominal fee in the summer. Students also have the opportunity to participate in numerous intramural sports activities during the year as well as individual sports activities such as golf, tennis, squash and figure skating. Sailing, rowing, and canoeing are also available at Yale facilities in nearby towns.

And of course New Haven, Connecticut is part of New England, and is thus in proximity to all of New England’s great resources; from its quaint towns, beautiful beaches and seaports to its mountain peaks and lakes for hiking, swimming, skiing, and mountaineering. It is also easy to reach the big city experience: New Haven is only 75 miles from New York, 100 miles from Boston, and both are connected by frequent and convenient train service.