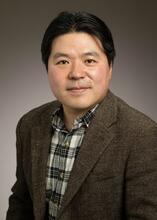 The demand for robots which can work closely and interact physically with human has been growing. Such robots can already be found guiding, serving, and entertaining people in some places, such as airports, restaurants, and amusement parks. However, despite advances in related technologies, there are very few robotic applications to meet the public’s expectations. To make robots help humans in daily life, we need better understanding of human evironments and tasks, better methods to perform the tasks through robots, and better design to interact with human naturally and safely. In this talk, I will present my works and experience to make human-friendly robots by means of robot design, motion control, and human-robot interaction.

Joohyung Kim is currently an Associate Professor of Electrical and Computer Engineering in University of Illinois at Urbana-Champaign. His research focuses on design and control for humanoid robots, system for motion learning in robot hardware, and safe human-robot interaction. He received BSE and Ph.D. degrees in Electrical Engineering and Computer Science (EECS) from Seoul National University, Korea, in 2001 and 2012. He was with Disney Research as a Research Scientist from 2013 to 2019. Prior to joining Disney, he was a postdoctoral fellow in the Robotics Institute at Carnegie Mellon University for DARPA Robotics Challenge in 2013. From 2009 to 2012, he was a Research Staff Member in Samsung Advanced Institute of Technology, Korea, developing biped walking controllers for humanoid robots.