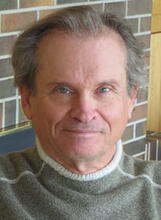 A long-standing proposition is that by emulating the operation of the brain’s neocortex, a spiking neural network (SNN) can achieve similar desirable features: flexible learning, speed, and efficiency.  Temporal neural networks (TNNs) are SNNs that communicate and process information encoded as relative spike times (in contrast to spike rates).  A TNN architecture is proposed, and as a proof-of-concept, TNN operation is demonstrated within the larger context of online supervised classification.  First, through unsupervised learning, a TNN partitions input patterns into clusters based on similarity.  The TNN learning process adjusts synaptic weights by using only signals local to each synapse, and global clustering behavior emerges. The TNN then passes a cluster identifier to a simple online supervised decoder which finishes the classification task. Besides features of the overall architecture, several TNN components and methods are new to this work.  A long term research objective is a direct hardware implementation.  Consequently, the architecture is described at a level analogous to the gate and register transfer levels used in conventional digital design, and processing is done at very low precision.

For the past several years, he has been studying neuron-based computing paradigms at home along the Clark Fork near Missoula, Montana.