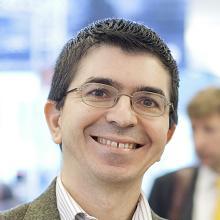 Growing theoretical and experimental research on action and language processing and on number learning and gestures clearly demonstrates the role of embodiment in cognition and language processing. In psychology and neuroscience, this evidence constitutes the basis of embodied cognition, also known as grounded cognition (Pezzulo et al. 2012; Borghi & Cangelosi 2014). In robotics, these studies have important implications for the design of linguistic capabilities in cognitive agents and robots for human-robot communication, and have led to the new interdisciplinary approach of Developmental Robotics (Cangelosi & Schlesinger 2015). During the talk we will present examples of developmental robotics models and experimental results from iCub experiments on the embodiment biases in early word acquisition and grammar learning (Morse et al. 2015; Morse & Cangelosi 2017) and experiments on pointing gestures and finger counting for number learning (De La Cruz et al. 2014). We will then present a novel developmental robotics model, and experiments, on Theory of Mind and its use for autonomous trust behavior in robots (Vinanzi et al. 2019). The implications for the use of such embodied approaches for embodied cognition in AI and cognitive sciences, and for robot companion applications will also be discussed.

Angelo Cangelosi currently is Professor of Machine Learning and Robotics at the University of Manchester (UK). He also is Turing Fellow at the Alan Turing Institute. Previously Angelo was Professor of Artificial Intelligence and Cognition, and founding director role, at the Centre for Robotics and Neural Systems at Plymouth University (UK). Cangelosi studied psychology and cognitive science at the Universities of Rome La Sapienza and at the University of Genoa, and was visiting scholar at the University of California San Diego and the University of Southampton. Cangelosi’s main research expertise is on language grounding and embodiment in humanoid robots, developmental robotics, human-robot interaction, and on the application of neuromorphic systems for robot learning. He currently is the coordinator of the EU H2020 Marie Skłodowska-Curie European Industrial Doctorate “APRIL: Applications of Personal Robotics through Interaction and Learning” (2016-2019). He also is Principal investigator for the ongoing projects “THRIVE” (US Air Force Office of Science and Research, 2014-1018), the H2020 project MoveCare, and the Marie Curie projects SECURE and DCOMM. He has been coordinator of the FP7 projects ITALK and RobotDoc ITN, as well as UK projects BABEL and VALUE. Overall, he has secured over £30m of research grants as coordinator/PI. Cangelosi has produced more than 250 scientific publications, and has been general/bridging chair of numerous workshops and conferences including the IEEE ICDL-EpiRob Conferences (Frankfurt 2011, Osaka 2013, Lisbon 2017, Tokyo 2018). In 2012-13 he was Chair of the IEEE Technical Committee on Autonomous Mental Development. He has been Visiting Professor at Waseda University (Japan) and at Sassari and Messina Universities (Italy). Cangelosi is Editor of the journals Interaction Studies and IET Cognitive Computation and Systems, and in 2015 was Editor-in-Chief of IEEE Transactions on Autonomous Development. His latest book “Developmental Robotics: From Babies to Robots” (MIT Press; co-authored with Matt Schlesinger) was published in January 2015, and recently translated in Chinese and Japanese.