From NBC Connecticut: Researchers at Yale Find Scientific Way to Predict Outcomes of COVID-19 in Patients 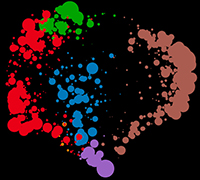 Since COVID-19 hit our state two years ago, more than 10,000 residents have died, but what if there was a scientific way to predict who would live and who would die?

A team of researchers at Yale think they may be able to do that with 83 percent accuracy.

This all started when researchers ended up with a lot of data from patients at Yale New Haven Hospital who were admitted with severe cases of COVID-19.

“They had such a massive amount of the data, something like a total of 54 million cells on 168 or so patients,” said Yale computer science professor Smita Krishnaswamy.

Researchers needed to find a way to analyze all of those cells so they teamed up with another group to use something called the multi-scale phate tool. It’s a machine learning tool that is being developed at Yale.

It allowed them to see very intricate details of the data that other systems cannot and what they found was pretty big.

“What Smita’s team found is that there are certain cell types that are more associated with mortality, and other cell types are protective of mortality,” Yale School of Medicine professor of immunobiology Akiko Iwasaki said.

“What’s actually seen in COVID patients is that these granulocytes secrete factors that can clog the blood vessels and, you know, damage the tissue itself and these granulocytes were found to be most associated with mortality,” according to Iwasaki.

“I hadn’t expected to find that one level one group of cells being protective. And then if you zoom in, there’s some bad apples inside that are actually destroying the body so that was surprising for me,” Krishnaswamy added.

Now that they know which cells protect and which cells hurt, doctors might be able to improve upon COVID-19 treatments, vaccines and mores.

“So from this particular study, we already can see what cells types are associated with mortality, and we can separate the patients based on that alone. And that can sort of help the doctors, you know, learn about the patients earlier, to kind of give them treatments that are, you know, more aggressive, perhaps to help them,” Akiko said.

Researchers think that this strategy can be used to predict outcomes for other types of infectious diseases, autoimmune diseases or even cancer. They’re even studying this process for neurodegenerative diseases.

This article is from NBCConnecticut.com