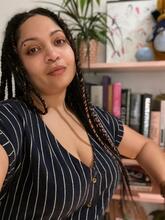 Across digital media, Black people are portrayed in ways that are derogatory, inaccurate, stereotypical, demeaning, and otherwise harmful–if we are depicted at all. The representation of afro-textured hair is noticeably limited, with options ranging from comically large afros, unstyled “dread” locs, and misshapen cornrows. In real life, natural Black hair is considered a liability in academic and professional settings, with Black people being subject to loss of employment, school suspension, and even having our hair forcibly removed before being allowed in athletic competitions. Laws such as the Crown Act in California are making headway toward justice and dignity for the corporeal Black body, but what of the virtual world? What advances can we make to address issues of power and representation in digital realms?

In this talk, artist and designer A.M. Darke discussing her development of the Open Source Afro Hair Library, a queer, feminist, antiracist 3D database for Black hair textures and styles. Functioning both as art practice and technological development, OSAHL is an interventionist work, building the resources needed to fundamentally reimagine the construction and consumption of Black bodies in virtual space.

A.M. Darke is an artist and game maker designing radical tools for social intervention. Still in the class war. Now in the pandemic. He’s in the combination class war and pandemic. Assistant Professor of Performance, Play & Design, Digital Arts and New Media, and Critical Race and Ethnic Studies, at UC Santa Cruz, Darke also directs The Other Lab, an interdisciplinary, intersectional feminist research space for experimental games and new media. Darke’s recent work includes ‘Ye or Nay?, a Kanye West-themed game about Black culture, and the Open Source Afro Hair Library, a 3D model database for Black hair styles and textures. Darke holds a B.A. in Design (’13) and an M.F.A. in Media Arts (’15), both from UCLA. He has completed residencies with Laboratory, NYU Game Center, the Open Data Institute, and the Frank-Ratchye STUDIO for Creative Inquiry at Carnegie Mellon. Additionally, his work has been shown internationally and featured in a variety of publications, including Kill Screen, Vice, and NPR.