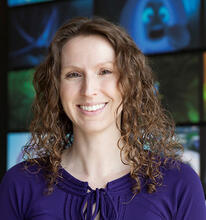 Hair simulation in animated feature films presents many challenges, ranging from incorporating artistic control to dealing with extreme, non-physical character motion. In a production environment, hair simulation needs to be fast, stable, and usable without excessive parameter tuning in order to produce content efficiently. These challenges only increase when simulating a variety of hair styles on numerous characters in the film. In this talk I will present our method for stably simulating stylized hair that addresses these artistic needs and performance demands. In addition to the underlying hair model that defines the physical motion, I will discuss various artistic controls and approaches used to produce our final hair simulations in several feature films.

Hayley Iben is the Director of Engineering for Applications in the Software R&D department at Pixar Animation Studios. Her teams are responsible for film production technologies for sets, layout, characters, shading, crowds, animation, simulation, lighting and rendering. Prior to undertaking this role, Hayley led the engineering team responsible for character simulation technologies, including cloth, hair, flesh, and skin, for seven of her fourteen years at the studio. Hayley’s expertise is in hair simulation and she has been developing the studio’s hair technology, Taz, that debuted in Disney Pixar’s “Brave”. She has also built tools for character articulation and animation, focusing on inverse kinematics and mathematical techniques. Hayley earned a B.S. in computer science from Duquesne University and a M.S. and Ph.D. in computer science from the University of California, Berkeley.