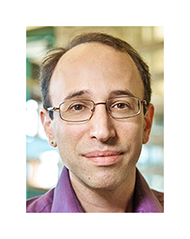 Daniel Spielman, Adam Marcus, and Nikhil Srivastava will receive the 2022 Ciprian Foias Prize in Operator Theory. The award recognizes their highly original work that introduced and developed methods for understanding the characteristic polynomial of matrices, namely the iterative sparsification method (also in collaboration with Batson) and the method of interlacing polynomials.

Together, these ideas provided a powerful toolkit with many applications, notably in the trio’s breakthrough paper “Interlacing families II: mixed characteristic polynomials and the Kadison–Singer problem” (Annals of Mathematics, 2015), which solves the famous “paving problem” in operator theory, formulated by Richard Kadison and Isadore Singer in 1959.

We are honored and delighted to be awarded the inaugural Ciprian Foias Prize in Operator Theory, and we wish to accept it on behalf of the many people whose work contributed to the resolution of the Kadison–Singer problem. Our involvement was the final chapter of an amazing story we hope will inspire similar solutions of difficult problems in the future. Had it not been for a series of works over a span of decades, we would likely have never known about the Kadison–Singer problem. Gil Kalai’s insight first introduced Dan and Nikhil to the problem. The eventual addition of Adam to the effort was, in many ways, due to a paper of Nik Weaver that argued (presciently, it turns out) that the aforementioned series of papers had revealed a combinatorial problem masquerading as an analytic one. Our progress came less from stereotypical flashes of brilliance, and more from systematic computer experimentation. The importance of computers in our work cannot be understated—while the eventual proofs were constructed “the old-fashioned way,” the discovery of “what we should try to prove” would likely never have occurred without the help of modern technology. Finally, we were fortunate to have the groundbreaking work of Julius Borcea and Petter Brändén at our disposal, and a revolutionary idea from Leonid Gurvits as inspiration.

You can read the full article from the AMS here.