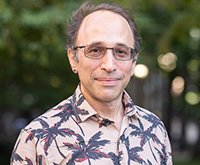 Yale’s Daniel Spielman has won the Breakthrough Prize in Mathematics for “​​multiple discoveries in theoretical computer science and mathematics.” The prestigious prize comes with a $3 million award.

Spielman, the Sterling Professor of Computer Science, Statistics and Data Science and Mathematics and Applied Mathematics, has taught at Yale since 2006. In addition to solving long-standing mathematical mysteries, his work has led to significant and very practical benefits in the fields of computing, signal processing, and engineering.

The 2023 Breakthrough Prize winners were announced today by the Breakthrough Prize Foundation and its founding sponsors — Sergey Brin, Priscilla Chan and Mark Zuckerberg, Julia and Yuri Milner, and Anne Wojcicki. In addition to Mathematics, the laureates are recognized for game-changing discoveries in Fundamental Physics and Life Sciences. The foundation also recognized early-career scientists who have made significant contributions to their fields.

“The Breakthrough Prize is a tremendous and well-deserved honor for Dan, whose work has been incredibly important to the fields of computer science, mathematics, and data science,” said Jeffrey Brock, dean of the School of Engineering and Applied Science. “His is the kind of work that reaffirms the fundamental value of abstract and foundational research, demonstrating how it can lay the groundwork for impactful and real-world benefits in numerous facets of life, in ways that we cannot always predict.”

The foundation cited several of Spielman’s achievements, including his role in solving the Kadison-Singer conjecture, a problem that had gone unsolved by mathematicians for more than 50 years. The problem essentially asks whether unique information can be gleaned from a system in which only some of the features can be observed or measured. The solution has relevance for numerous fields, including statistics, pure mathematics, the mathematical foundations of quantum physics, and computer science.

Spielman has said that much of his work has focused on designing faster algorithms to solve systems in linear equations, and then leveraging those algorithms to perform other functions even faster. Winning the Breakthrough Prize, he said, is “a huge honor and a little overwhelming.”

“I am excited that the committee has chosen to recognize work at the interface of theoretical computer science and mathematics,” Spielman said. “I have always loved how our era of digital technology allows advances in mathematics to become real-world technology, and how technological problems can inspire the development of pure mathematics. People like me who work between the two are never sure whether to call ourselves ‘mathematicians’ or ‘computer scientists’ because we are always mixing the fields.”

Spielman’s research has led to countless applications, from better medical imaging to improving the design of clinical trials. His work has also helped revolutionize the field of error-correcting codes, which allows communication devices to transmit information even if part of it is corrupted. That work has made communication faster and more reliable and has been used for broadcasting high-definition television.

The Breakthrough Prize is just the latest of the many accolades that Spielman’s work has earned. In 2013, he was named a MacArthur Fellow, popularly known as the “genius” grant. The Simons Foundation named him to its inaugural class of Simons Investigators, and he has won the Rolf Nevanlinna Prize, one of the most prestigious awards in mathematics. He has also twice won the Gödel Prize, awarded annually for outstanding papers in the field of theoretical computer science.

This article is from Yale News.