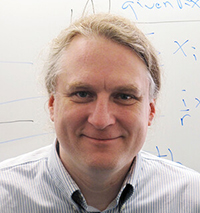 James Aspnes, a world leader in the field of distributed computing, has been appointed the Harold W. Cheel Professor of Computer Science, effective immediately.

Aspnes is a member of the Faculty of Arts and Sciences (FAS) in the Department of Computer Science.

In 2020, he won the ACM-EATCS Dijkstra Prize in Distributed Computing for his work on the population protocol model (which he and his colleagues developed in 2004). The population protocol model was initially used to represent computations by sensor networks composed of computationally weak agents with no control over their movement. Since then, it has been widely used to model chemical reaction networks and biological systems, and many variants of the original model have been proposed.

In addition, Aspnes, along with one of his students, Gauri Shah, invented skip graphs, a highly influential data structure with the full functionality of a balanced tree in a distributed system. Skip graphs have been widely used in searching peer-to-peer networks. As they provide the ability to query by key ordering, they improve over search tools based on the hash table functionality only. In contrast to skip lists and other tree data structures, they are very resilient and can tolerate a large fraction of node failures.

Aspnes has held multiple major grants from the National Science Foundation in recognition of the broad impact of his work, and he is the author or co-author of more than 150 papers. He has delivered invited lectures at MIT, the University of Toronto, Brown, Columbia, and other institutions across the country and around the world. He has served on the editorial board for the top journals such as SIAM Journal on Computing, Distributed Computing, and Algorithmica. He was the program committee chair for the ACM (Association for Computing Machinery) Symposium on Principles of Distributed Computing in 2005.

He is also an exceptional teacher and mentor. He served as the Director of Undergraduate Studies (DUS) in the Department of Computer Science from 2002 to 2004 and again from 2014 to 2021. He teaches introductory and advanced courses on computing, programming, and algorithms and has supervised dozens of undergraduate senior projects. In 2000, he received the Dylan Hixon ’88 Prize for Teaching Excellence in the Natural Sciences from Yale College.

He earned a bachelor of science degree and master’s degree from MIT, and his Ph.D. from Carnegie Mellon.