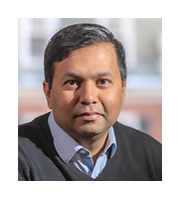 Vishnoi is a member of the Faculty of Arts and Sciences and the School of Engineering & Applied Science. His research spans several areas of theoretical computer science, optimization, and machine learning. He is also interested in understanding and addressing some of the key questions that arise in nature and society from a computational viewpoint, including emergence of intelligence and the interface of artificial intelligence, ethics, and society.

He earned a B. Tech. in computer science and engineering at the Indian Institute of Technology Bombay in 1999 and a Ph.D. in algorithms, combinatorics, and optimization from the Georgia Institute of Technology in 2004. He has since worked in both industrial research labs and academia, most recently at Microsoft Research in India from 2009 to 2014, and then as an associate professor with tenure at École Polytechnique Fédérale de Lausanne in Switzerland. He joined the Yale faculty as a full professor in the Department of Computer Science in 2019.

Vishnoi’s most recent book, “Algorithms for Convex Optimization” (Cambridge University Press), is scheduled to be published in the summer of 2021. At Yale, he is also a co-founder of the Computation and Society Initiative, where researchers from across the university work to address the complications that arise as algorithm- and data-driven technologies permeate and alter various aspects of modern society.