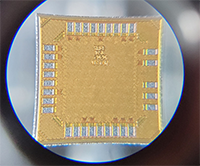 Since they came into use by physicians and researchers, Brain-Computer Interfaces (BCIs) or Brain-Machine Interfaces (BMIs) have provided ways to treat neurological disorders and shed light on how the brain functions. As beneficial as they’ve been, BCIs have potential to go far beyond the technology’s current capabilities. In a collaboration between the Yale School of Engineering & Applied Science (SEAS) and Yale School of Medicine, a team of researchers are looking to break through these limitations.

“The goal is to build a class of ultra-low-power devices that are safe for chronic implantation in humans,” said Abhishek Bhattacharjee, associate professor of computer science. “Chronic implantation opens the door to a number of clinical uses, ranging from implants to treat epilepsy and movement disorders to designing assistive devices for patients with paralysis, as well as many research uses.”

Chronic implantation is the practice of placing a device in the brain of patients, who then go about their daily lives, albeit with regular check-ins with their doctors. At SEAS, Bhattacharjee has been working on this with Rajit Manohar, the John C. Malone Professor of Electrical Engineering and Computer Science, and Anurag Khandelwal, assistant professor of computer science. Their collaborators at the Medical School are Dennis Spencer, the Harvey and Kate Cushing Professor Emeritus of Neurosurgery, and Hitten Zaveri, assistant professor of neurology.

The research team’s work is part of a larger effort to push the potential of BCIs to accomplish things that once seemed the stuff of science fiction. A video of a monkey playing Pong with the help of a neural interface created by Elon Musk’s company, Neuralink, has been viewed by millions. The same company has raised hundreds of millions of dollars for the technology. And it’s more than just buzz fueling the interest. Synchron, Inc. received permission from the FDA earlier this year to begin human testing for a brain implant designed to treat paralysis.

The BCIs that epilepsy surgeons Spencer and Zaveri commonly use are implanted in the brain just below the skull — it’s small and you typically wouldn’t know that someone has one. The device continuously monitors the patterns of the patient’s brain, detecting any anomalies as a way to predict an oncoming seizure. When it does so, the device sends an electrical stimulus to specific regions of the brain to disrupt those patterns. At this point, it’s used only for patients who are resistant to drug treatment. Spencer said most epilepsy patients using BCIs see their seizures decrease by at least half after 18 months. While it’s been effective enough to become very popular for patients with limited options, Spencer and Zaveri are looking toward a technology that could prevent all seizures. A BCI with considerably enhanced capabilities such as the Yale solution, they said, could bring about that result.

The tricky part about this goal is that these implantable BCIs are limited by how much power they use. Federal and international guidelines state that BCIs must not use more than 15 to 40 milliwatts of power, depending on the depth within the brain tissue that the BCI is implanted. Anything beyond that is unsafe for chronic implantation in humans. Excessive power dissipation causes the devices to overheat, which brings the risk of damaging the cellular tissue of the brain. The SEAS researchers’ task, then, is broadening the potential of these devices while staying within a very constrained power limit. They’re limiting the power of their own device to 15 milliwatts, which would allow it to be placed deeper into the brain, where power constraints are more stringent.

“So, it’s power-constrained, but at the same time, there are some serious computation needs here - you need to be able to read and perform fairly sophisticated signal processing on more and more data from the brain for these devices to be more useful,” Bhattacharjee said. “How you do all of this under really tight power budgets of 10 to 15 milliwatts is a wide-open question.”

To that end, they’ve developed HALO (Hardware Architecture for Low-power BCIs), a general-purpose architecture for implantable BCIs. The technology allows for the treatment of various conditions, and records and processes data for studies to advance our understanding of the brain. The technology includes a chip and sensors and allows for a microelectrode array that reads roughly 50 megabits per second from 96 distinct parts of the brain. And unlike other BCIs, which are designed for one specific purpose — treating epilepsy, for example — the HALO technology can support numerous tasks. This is all achieved while operating within the team’s strict power budget.

The initial HALO concept was detailed in a recent paper, “Hardware-Software Co-Design for Brain-Computer Interfaces,” authored by the Yale researchers in collaboration with scientists at Rutgers and Brown University. It was published at the flagship conference for computer architecture, the International Symposium on Computer Architecture, and was selected for inclusion in IEEE Micro’s Top Picks in Computer Architecture magazine as one of the top computer architecture papers published in 2020.

“One of the things that I’m particularly excited about in our research is that it shows that if you build BCIs that can balance specialized hardware with general purpose hardware in a principled way, you can actually be under the power limit, while supporting a much broader class of computational functionalities than what existing devices support,” Bhattacharjee said. He also believes that the results point to a broader question beyond BCIs, particularly because the waning of Dennard scaling (the principle that as transistors get smaller, their power stays constant) “poses questions about how best to determine what to build hardware accelerators for, how to integrate these hardware accelerators seamlessly, and how to enable a modular platform that can naturally slot in new accelerators. HALO is an exemplar of these research questions.”

The lead graduate student on the HALO project, Karthik Sriram, said he became interested in the field of BCIs as an undergraduate. “I wanted to see how we can bridge this gap between the human brain and our attempts to analyze it — and how to integrate that with computer systems that we have come to be more comfortable using,” said Sriram, a Ph.D. student in Bhattacharjee’s lab.

The work they’ve done at Yale is just the beginning, he said.

“HALO is a working demonstration that we can get a more flexible architecture that can do a lot more than current BCIs and support a much higher data rate,” Sriram said. Beyond that, he said, the research could lead to some exciting possibilities, such as creating a network of BCI devices that record from multiple parts of the brain.

“Neuroscientists are interested in that because they’re looking to analyze the brain like a bunch of graph connections — especially for something like seizures,” he said. “They’re starting to analyze it as a more graph-based problem, rather than a single-source localized problem.”

Manohar’s role on the team is taking the design for HALO and building chips to create a physical device. He worked on the chips with postdoctoral associate Ioannis Karageorgos and graduate student Xiayuan Wen. The researchers figure it could be a few years before they have a prototype for human trials.

“It takes effort to do a good job, like everything, and as we learn more and more about the problem, we’re building it in steps, we’re starting with the core of its architecture and adding to it,” Manohar said. “And we’re designing the architecture to make it relatively modular and easy for us to extend it.”

Khandelwal has lent his expertise in distributed systems to the project. His first goal, with Bhattacharjee, is finding a way to increase data storage in BCIs while working within the power limitations. Currently, researchers conducting a longitudinal study on a patient with an implanted BCI would need to bring the patient into the clinic to collect the data from the implant. It’s cumbersome and limits the amount of data that can be collected.

“What we are essentially looking for is something where the BCI upstreams the data to another device in the patient’s home, or somewhere near it,” he said.

More ambitiously, he wants to improve the communication between the different components of a BCI to reduce latency. In a system that’s designed to detect and ward off oncoming seizures, or in a brain-controlled prosthetic limb, speed is critical.

A major part of this project is the fact that implantable BCI technology has a broad range of use. In addition to epilepsy, prosthetic limbs, and research purposes, the devices have been used to treat people with conditions such as Parkinson’s disease, schizophrenia, or elevated levels of anxiety. So not only do the researchers want to extend the capabilities of these devices, but they also want to design them in a way that allows them to be adapted to changing needs.

“This is a field where new things are being discovered continuously and the field evolves and you don’t want to have to build a new device every time different groups decide they want new functionality,” Manohar said. “We’re trying to address a much broader range of possibilities with a single device.”

And that, Zaveri said, is crucial to expanding the range of patients who are eligible for BCIs.

“The Yale team’s work allows us to draw from a larger set of application areas and patients because they’re not making what we call an ASIC — an application-specific integrated circuit — they’re making a powerful general-purpose solution on which you could run different algorithms,” Zaveri said. “So, you could have a version for epilepsy, and another version for patients who are paralyzed - the hardware could be the same, though.”

“We’re currently collecting data and processing it offline, so this development enables studies and therapies that aren’t possible at present,” he said.

For instance, he said, a device that allows clinicians to monitor the brain of an epilepsy patient and detect aberrance in an epilepsy network in real time and can modulate that network increases the possibilities for treatment. It also expands what disorders can potentially be treated, such as depression and other neuropsychiatric disorders with a broader, more diffuse manifestation in the brain.

Nicholas Turk-Browne, a professor of psychology at Yale, has also talked with the SEAS researchers about applying their work to his own research.

“One application they’re doing is clinical, but another is to study brain function with precision and then to use those signals for neurofeedback-type applications,” said Turk-Browne, director of the Wu Tsai Institute. “Both require expertise with designing cognitive tasks and psychological experiments, which is the expertise that I bring — how to measure and quantify human behavior and brain function with respect to cognition. So, I’ve had a lot of conversations with them about that.”

Spencer noted that this work is in the spirit of Yale’s collaborative environment.

“This is the beauty of cross-disciplinary research,” he said. “I am a clinician and throughout my career I have presented problems to those who are smarter than I am technologically. And those researchers may be working on something more theoretical or on something in a different field, when something lights up and they say, ‘That problem may have a solution in what we’re doing.’ The chips they are developing just unlock a whole new world for those of us who are asking questions about how to deconstruct brain function into parcels that can then be reconstructed as a meaningful network for study and modulation.”