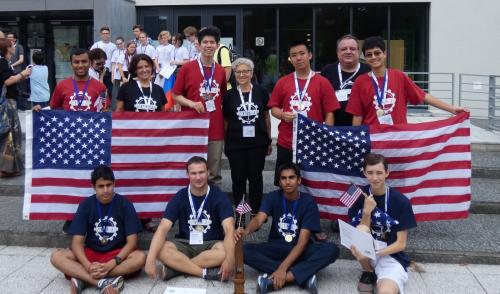 On July 24, eight USA students traveled to the Czech University of Life Sciences in Prague, Czech Republic. 192 contestants in 48 teams from 30 countries and territories participated in the 16th International Linguistics Olympiad (IOL). The two US teams were selected by the North American Computational Linguistics Olympiad (NACLO). The team coaches are Dragomir Radev of Yale and Lori Levin of Carnegie Mellon University. They have been coaching the US teams since 2007.

The IOL is one of twelve International Science Olympiads for secondary school students. The contest consists of two events: the individual and the team contest. The individual contest is a six-hour exam with five problems. This year, the individual round featured the following languages: Creek, Hakhun, Terêna, Mountain Arapesh, and Akan. In the team contest, team members collaborate to solve one particularly challenging problem. This year, teams were given four hours to translate a long list of words and sentences between three indigenous languages of Brazil - Mẽbêngôkre, Xavante and Krĩkatí. Problem solving at the IOL stresses the ability of contestants to decipher the mechanisms of languages by using logic and reasoning to explore a wide range of hypotheses.

The US team took home eight individual medals. Swapnil Garg of USA Red, Benjamin LaFond of USA Blue, Pranav Krishna of USA Blue, and Andrew Tockman of USA Red took home gold medals. Silver medals went to Mihir Singhal of USA Blue, Ethan A. Chi of USA Red, and Russell Emerine of USA Blue. Finally, Brian Xiao of USA Red was awarded a bronze medal. Team USA Blue was also recognized for receiving the highest combined individual scores, scoring an average of 70.25, and ahead of a team from Bulgaria and a team from the UK. In addition, Andrew Tockman was awarded the best solution for his answer to problem 1 and Swapnil Garg received best solution for problem 5. Lastly, USA Blue and USA Red took home gold and silver medals, respectively, in the team competition, followed by teams from Bulgaria, Brazil, the United Kingdom, and the Czech Republic.

The two USA teams were selected through the North American Computational Linguistics Olympiad (NACLO). This annual competition, held since 2007, has two rounds, which are held at universities and high schools throughout the USA and Canada. This year over 1,700 students took the open round, a three-hour test. Approximately the top 10% of the students from the open round were invited to the next round, a more difficult, four-hour test.

Registration for the next NACLO competition starts on September 1 at www.nacloweb.org.