Who Is Matt Amodio, Jeopardy! Champion? 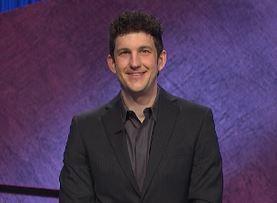 Proving that he’s equally versed in the founding fathers, the Beatles, Ethiopian leaders, and many, many other topics, Matt Amodio is the fourth-winningest Jeopardy! player of all time, with earnings of more than $475,000 (as of press time - the numbers change fast). “A Ph.D. student from New Haven, CT,” as he’s introduced every night at the start of the show (which has a policy against naming contestants’ employers), Amodio is a fifth-year Computer Science Ph.D. candidate in the lab of Smita Krishnaswamy, assistant professor of genetics and computer science. We caught up with Amodio at his parents’ home in Ohio to talk about his remarkable run.

So, how do you know so much?

You know, I read a lot - I have to credit my love of reading. I spend most nights starting somewhere on Wikipedia. I read everything there, but also get 10 or 15 links from that article to other things that I’m interested in. That cascades to more and more, and before I know it, the night’s over and I still have thousands of things I still want to read. And it just starts over the next day.

This is even before your Jeopardy! ambitions?

Yes, I just like gaining knowledge in general. What I will say is I’m a historian - I love learning about things before my time. For Jeopardy!, I knew they were going to ask about recent movies - and by recent, I mean in my lifetime, not just this year [laughs]. Recent movies, recent music, television shows - I’m not very up-to-date on those. So for Jeopardy!, I did force myself to learn about those, which are not necessarily my top interests.

You swept American History, among other topics.

I’m glad that they show the category titles on the camera - otherwise you would see the huge smile on my face whenever American history comes up - that’s my wheelhouse. Then, when I see things like celebrity marriages, I cringe a little bit.

How are friends and family reacting to all this?

They’re just extremely happy. I’ve heard from people I haven’t heard from since graduating from high school, maybe even middle school - just being very nice, sending congratulations. My parents are getting stopped just walking around the city. My mom, who was in the doctor’s office, got stopped by nurses who weren’t even her nurse, saying “Are you Matt’s mom?” It’s just been a treat.

How about your lab mates?

They’ve also been following on Slack. There’s a daily message saying “Wow!” or “Oh my goodness!” They were a little more fast and furious in the beginning, and then I think they started to realize “Oh, this might go on for a while.” They’ve been very supportive.

How would you describe your area of research?

In the broadest sense, I’m in the department of Computer Science, but I focus on artificial intelligence and deep learning - specifically, neural networks. And within that, by virtue of being in Smita Krishnaswamy’s lab - she works in Genetics as well as Computer Science - my big thing is applying neural networks on biological data.

Has your research played a role in how you play Jeopardy! or learn trivia?

My snarky answer is that I think that I work with neural networks enough to know that they aren’t going to be good at this. Famously, IBM’s Watson competed on Jeopardy! and it’s very good at competing, but I don’t think a human should apply its strategies and do it less well. I think it’s just a completely different way of going about it. These neural networks are very good when they have perfect access to gigabytes of data. But since our brains can’t do that, we have to go about it a different way. I think studying social science - good ways of studying and good ways of retaining - has been far more helpful than anything in my home field of computer science.

Between your research and your extensive Jeopardy! experience, you might be the best-positioned person to work on a next-generation Watson.

You know, if invited, I would love to give that a shot. I have a feeling that I would find it challenging. That’s not an easy job, but that sounds fun.

How many games do you tape in a day?

They go in and they tape a whole week - so five games - in one day. And boy, it’s a long day. You go in there at 7 in the morning. And I’m not a morning person - I just discovered that there is a 7 in the morning, as well as the 7 in the evening that I already knew about. And I’m there until about 6 p.m. or 7 p.m.

So do you come equipped with five anecdotes for the mid-show break?

Your answering style prompted some controversy, but Jeopardy! producers defended it.

Yes, I have a strategy where I form all of my questions with a “what’s” at the beginning - then, I can focus on the rest of the clue. Other people have been very upset about me being robotic instead of forming a question differently each time. I was glad that Jeopardy! said this was perfectly within the rules. I’ve watched Jeopardy! every day of my life, so I knew it was OK.

That’s the kind of thing we do in computer science all the time. You have a section of your program and it does “A” or it does “B” and it has to decide which. Then you realize “Wait, we never actually need to do ‘B,’” so you cut that off and just leave a smaller bit of program. It’s cleaner and where there are fewer things moving, there are fewer things that can go wrong.

Have you been watching Jeopardy! your whole life?

Absolutely, before I was even able to understand the words. My parents watched it every day. I don’t remember it, but I’m sure there was that moment when I got my first question right and for the first time in my young life I said, “Oh my God, I knew one!”

When did you decide that you wanted to be on the show?

They have an online test that they offer a couple times a year. I took it not because I thought I’d get chosen but because my dad was pestering me - “You’re smart, you can do it,” and I said “No, I’m not going to do it.” He says, “‘Just do it - for me!’ So finally, I took the online test just to satisfy him and never expected anything of it. And I don’t think I heard anything the first time, but the second time I took it, I got invited to an in-person audition. I definitely have to tip my cap to my dad on that one - You’re right, I’m glad I did that!

Can you say how long your run goes for?

[Makes a “zipped lip” gesture] Sworn to secrecy. Tune in to find out.